Brainstorm (aka Tormentem) and Devious – formerly with Dj Vame

pioneers of the Campbelltown Hip-Hop movement, tearimg up stages across Australia alongside Def Wish Cast, Capital Punishment, Finger Lickin’ Good (Groove Terminator) and Intense Quality (Reason). Upon the verge of

launching both their new album, and their lost tapes compilation, 046 have released the final copies of the 1995 classic “L.I.F.E“. This is not a newly made re-release, but the final copies that had been held for safe keeping, making this your last chance to grab this defining moment in Australian Hip-Hop history. 046 “L.I.F.E.” is available now through Hardcore Classicdistribution.
Ex-DEF WISH CAST member DJ VAME appeared behind the decks on CAPITAL PUNISHMENTs “Sentenced 2 Def” six song tape, as well as on Campbelltown locals 046 (named after their area code) thirteen track CD “Life” released in 1995

Forming in 1989 as a seven man crew, and named after the regional telephone code for Sydney’s Southwest, 046 is best known as the Claymore based duo, consisting of Brainstorm (aka Tormentem) and Devious. The crew emerged alongside the forefathers of Australian Hip-Hop – such as Just Us and Def Wish Cast, and featured in numerous Australia wide tours and shows.

These connections brought about the production hook-up with Def Wish Cast member DJ Vame. The result was the 1995 album “L.I.F.E” (Legends In Full Effect). This was hardcore Hip Hop to it’s full. Vame’s rough production partnered with the lyricists raw delivery captured an energy and spirit rarely heard in today’s ‘safe’ Hip-Hop. The album put Campbelltown on the Australian /hip-Hop map, and influenced numerous younger emerging artists from the region.

With Vame’s production, 046 became part of the larger Dope Runner crew alongside Capital Punishment. As a collective, Vame released the compilation/album “Australiaz Most Wanted” with assistant production by Nayss. The compilation featured remixes from the albums “LIFE” and “Sentenced II Def“, as well as fresh new tracks including the classic 046 and Capital Punishment collaboration, titled “VOS“. 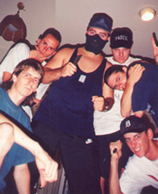 After numerous tours and shows around the country, the duo began work on a follow up album with DJ ASK(West Side Posse/Renegade Funktrain) on production. To be title “Retaliation“, the project was unexpectedly cut short when ASK was drawn overseas to tour with Renegade Funktrain. With the album unmixed and indefinitely on hold, differences saw the duo spilt, and Tormentum began a long struggle with cancer. While the two stayed close, 046 was no more, and the two began appearing as soloists.

In the late 90s, Tormentum appeared on the “Hidden Treasure” compilation with a song titled “Suspects“. The Vame produced track featured Tormentum and original 046 member, Son of Mad Dog, as the duo Gung Ho, and included the first released verse by Raw the Cannibal, under the name The Cannibal Tribe. The Tribe returned the favour when Tormentum appeared for the track “Remedy” on their 1999 album “Misery”, while earlier, they collaborated on the cut “The Last Run” for the “Basic Equipment” soundtrack.

Devious began work in Hip-Hop workshops around the Campbelltown area, passing on his skills as one of Sydney’s most talented b-boys – and featured on the community project CD “Cam(p)belltown” with his solo cut “Atcha” produced by Elee B.

In 2003, the crew has returned, with 046 officially back in the studio working on a new album with production by Thomas Rock. But first, 046 are set to drop a collection of lost, and rare recordings – featuring their cuts from “Australiaz Most Wanted” and newly mastered “Retaliation”. The new collection is out soon through Hardcore Classic distribution.

– In September 1994, 046 were featured in the ABC documentary “Growin’ Up Fast“, which compared the difference between young Thrash-metal and Hip-Hop artists.